Canada, a country of big cars, big buildings, big distances. We came here for a big vacation of 6 weeks with our little one-year-old daughter. For us, it’s a country of our first intercontinental travel, first travel experience outside Europe.

There were certain concerns regarding such a long and distant journey with a baby but in practice, everything turned out much easier and with less stress than we’d expected. More about the challenges of traveling with a baby and the ways we’ve solved them here.

Anything starts with planning, With such a long and intense trip, and with a baby in tow, a lot of planning needed to be done.

First part is actually understanding where you want to go. We didn’t have a problem with choosing a country but what next? As huge and diverse as Canada is, we had to plan our itinerary carefully – to see as much as possible in the 6 weeks that we had.

We decided to fly to Toronto, drive to Ottawa and Montreal, return to Toronto through Kingston and then take a flight to Calgary, rent a car for 4 weeks there and drive through the Rocky Mountains, all the way to the City and then the Island of Vancouver and back. After that great loop and some Calgary time, there was another flight – to Toronto and in 48 hours yet another one – back to Amsterdam.

Having drawn the initial plan, it was time to choose the airways – comparing prices, reading reviews, checking the times – all that is very important in planning a flight.

We chose KLM as our intercontinental carrier for their prices, good reviews, and convenience. There was an option of a connecting flight through Reykjavik but we decided to take it easy with our first big journey and take the direct (though more expensive) flight.

Inside the country we used the WestJet – the price/ quality rate was good enough. It was a surprise that they didn’t have lap belts for infants (without a separate seat) like they always do in Europe.

Another option to consider was open jaw – one-way tickets within one trip but we found it cheapest to do 2 return flights and rent a car in Calgary and Toronto and then return it at the same place, otherwise, the price was almost double.

Then, we needed to think of a car rental. The best deal we found was from Enterprise, in both locations. Tip – check the prices in various locations which could be an option for you – they do differ a lot. And if we are talking about 4 weeks rental, the total price might be very very different. The airport office had the most expensive tariffs. Even adding the costs of a taxi, it was much cheaper to go to another one, deeper in the city, than renting at the airport.

Having a one-year-old with us, we had to think of a car seat too. It turned to be cheaper to buy a used car seat than rent it for 6 weeks. We couldn’t take ours because of the different standards of EU and Canada. If you have somebody who can help you arrange the purchase at your destination, it can be very helpful.

A certain pain in the neck was to find accommodation. We couldn’t take a risk and just find it on the spot and decided to plan everything ahead. All our 14 accommodations we booked through Airbnb and spent over 2 weeks on choosing the right ones for us, 2 weeks of sitting at the laptop every day and clicking through the pictures, descriptions, and reviews. We were so happy when it was over.

Our nationality requires that we need a visa to enter Canada. If yours doesn’t, scroll to the next paragraph.

The application process is done online. You fill out the forms, attach scans of the required documents, hit send and wait. If the visa application is approved, then you send the passport to the nearest Visa Centre (in our case VFS Global in Dusseldorf, Germany) and they forward it to the Embassy which is in Vienna, Austria for the EU residents.

But what if your visa is not approved? Yes, it happened to us. In this case, there are 2 ways – to let yourself be discouraged and ask for the reimbursement of the tickets from your airline company or try again. We were discouraged and disappointed. But still, we chose the second way. This time, we added even more documents and their translations, attached a long letter with our purpose of visit and explanation why staying illegally is not in our interests and goals at all. This time they believed us and we were granted the awaited stamps.

This experience taught us 2 things:

Having traveled a lot to destinations which don’t require visas for us, we lost our skills at applying for a visa. Thus, the first lesson – don’t relax too much.

Second lesson – don’t give up. One refusal doesn’t mean anything. Your next try can be a success like it happened to us. If you don’t try, you lose anyway.

The baby slept through the most of the flight, which was good. For everybody’s peace. But not for mommy’s bum. I suffered from coccyx pain for a few months after that. I didn’t sleep at all for the fear the baby would fall from my arms, so on the flight back I was smarter and used the sling to have my hands free. 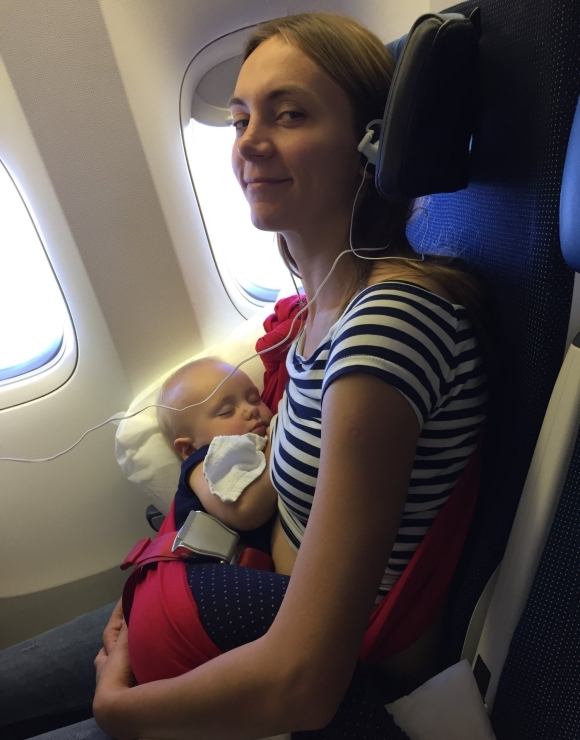 It was one of our first concerns and for a reason. The first night was completely ragged, the day was hard. Next 2 days there were early wake ups but then we were totally adjusted. On the way back though, the jet lag hit harder, it took us about a week to go back to normal and the first 3 days were the most difficult.

The polite people of Canada

Canadians are famous for their friendliness and politeness. And we could see why. People give you way and help whenever you need it. In Toronto and Vancouver, it happened several times that we were approached by total strangers offering help while we were trying to figure out where to go next starting at the map on the phone.

Canadians love children. Our daughter learned that the phrase ‘what a cutie’ refers to her and when she hears that phrase now, she turns her head and smiles. The country is very baby friendly, too – in every big mall you can find not only changing rooms or pads in both male and female toilets, but also nursing rooms (for (breast)feeding, where only women are allowed) with sofas, microwaves and toys, and family rooms. Changing pads and high chairs are present in many cafes.

You can go with a stroller almost anywhere, even on some touristic paths in the mountains. But our daughter didn’t like sitting in the stroller at the time, so we took our Vaude backpack. It gave us mobility but daddy’s back was sore at the end of our 6 weeks travel.

You can find any type of food in any supermarket – both healthy or junk. But fast food is obviously popular there.

As we were staying exclusively at Airbnb and friends, we asked the hosts if it’s safe to drink tap water. And almost everywhere we were told that the water in that area was the tastiest in the whole Canada (or in the world). It was funny to hear that for the 4th, 5th etc time. But on a serious note, it is safe to drink from the tap (almost) everywhere (in Toronto we drank bottled water and in Kelowna, we were suggested not to drink from the tap in unusual places, especially on a trip).

Canada is often referred to as a cold country. But in August-September, we were never cold (except for the mountain regions and at the oceanfront). Otherwise, it was a real summer, sometimes too hot.

Canada probably has all kinds of landscapes: lakes, oceans, mountains, flats. We saw numerous species of wildlife, birds, and animals, we even encountered 3 bears and bighorn sheep, fortunately, while driving.

The streets and side roads are clean in Canada. Why? Because there are enough people cleaning those. You can often see people on quads or on foot picking up garbage along the roads. And we were happy to see that Canadians do sort their garbage and recycle. And it’s spectacular how they pick up garbage (not sure about the whole country, we saw it in North Vancouver) – two very sportive guys empty the bins in the constantly moving truck at a spectacular speed.

And guess which streets are the most beautiful?

They are so wide compared to the European ones! There are bicycle lanes but not so many. All cyclists wear helmets and ring their bell all the time which you quite rarely hear in the Netherlands. The traffic lights are located in a different way than in Europe – after the crossroads, and there are lots of 4-way stops.

The baby on the trip

At one of the airports, we had a talk with a woman who was really surprised how we could venture to go on such a long and dynamic travel with a baby. She’d only taken her kids to all-inclusive resorts.

So was it hard? Of course, without kids you are able to see and do much more than having them in tow. But our child is a part of our family and we had our baby not to leave her to somebody else and continue living as if nothing happened.

Moreover, children develop really fast in the dynamic environment of traveling. During this trip, our Sasha started walking without support. She was holding to a bench and watching how people were going in and out of a campervan. She was so mesmerized by this extraordinary car that she just released the bench and started walking toward this exciting target. Very soon she realized what was happening and sat on her bum. But that was the beginning, after this day she started walking more and more and in a couple of weeks, she was joyfully running away from us.

During this journey, we covered over 20 000 km in total, lived at 16 homes, spent lots of time on planning and a chunk of our savings. We made it, the 6 weeks with a baby-becoming-toddler, planned from scratch by us. Was it hard? Was it exhausting? Yes, sometimes. But we saw a lot of amazing places, we met some wonderful people, we got a lifelong experience and beautiful memories. It was unforgettable and worth every bit of the effort (and money) it took.

Moreover, it was a great time for our whole family to be together, father and daughter could finally see each other whole day every day instead of a few hours during workdays and at the weekends. It was so precious to watch their bond growing. 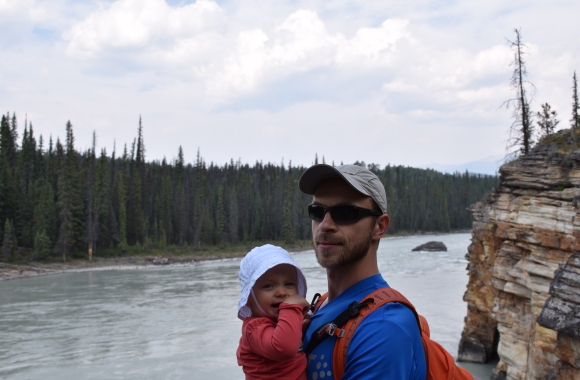 6 weeks is not just a holiday trip. That’s a piece of life. As the time passes, you do not feel yourself like a tourist anymore, your home is feeling more and more like a distant or nonexistent place and you start wondering what home is…

[…] but she had clearly outgrown that age – if this trick played perfectly when she was 1, on our long flight to Canada, now that she was 2 years of age, more wriggly in her sleep and definitely bigger, the sling was […]